Breastfeeding is best for babies and provides them with all the nutrients they need for a healthy growth and development. Exclusive breastfeeding is recommended for six months. After the introduction of foods at six months of age, recommendations include continued breastfeeding until one to two years of age or more. In preparation for and during breastfeeding, the mother’s diet should be balanced and contain sufficient key nutrients. Combining breast and bottle feeding in baby’s first weeks of life may reduce the mother’s supply of breast milk, and reversing a decision not to breastfeed is difficult. When mothers do not breastfeed, an infant formula may be used according to health professionals' advice. Improper preparation of an infant formula may lead to health hazards.

Or return to Homepage

Novalac is a pioneer in the management of Cow’s Milk Allergy (CMA). We provide several solutions for babies either at risk of developing allergies or with a diagnosed allergy.

In case of food intolerance (e.g. enzyme deficiency), the immune system is not (or almost not) involved in the reactions. “Allergy to lactose” is therefore an improper wording, adverse reaction to lactose (diarrhea, etc.) should be named “lactose intolerance”.

Lactose intolerance is due to the absence or a metabolic deficiency of the lactase enzyme (disaccharidase of the intestinal brush border). If not hydrolyzed, lactose cannot be absorbed in the intestine. Therefore, the bacterial flora transforms this disaccharide, through a fermentation process, in short chain organic acids and gas. This fermentation can lead to abdominal pain, flatus, bloating, loose stools or watery diarrhea. To manage lactose intolerance, lactose should be avoided in the diet1.

Allergies are the expression of an adverse reaction of the organism that does not tolerate foreign elements (food elements, dust, insect bites...). Food allergy is defined as an immunologic reaction to a harmless substance in food. This type of reaction is called an allergic reaction. There are several types of immunologic reactions depending on whether it implies Immunoglobulin E (IgE) or not. IgE-mediated reactions occur usually a few minutes or a few hours after the ingestion of the allergen whereas non IgE-mediated reaction can take place a few days after1.

Classification of adverse reactions to food (issued from2)

Allergy may lead to several symtoms 1-4 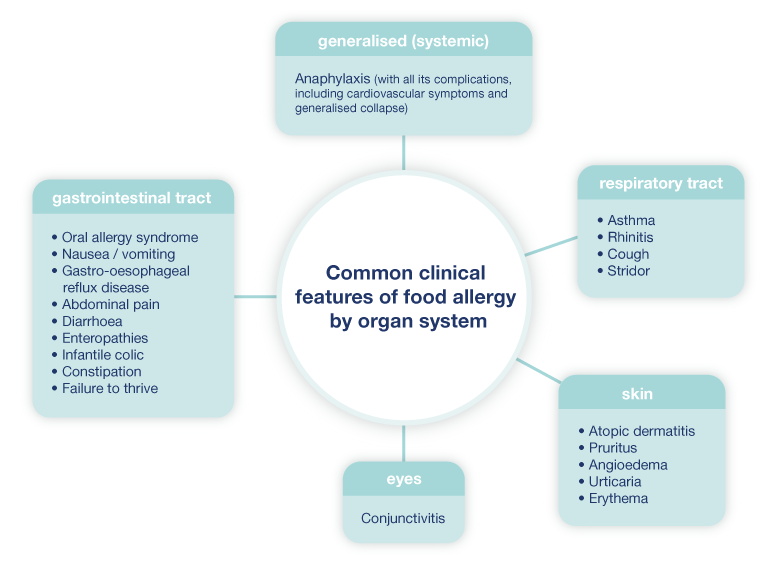 Several studies indicate that 75 % of allergic reactions among children are due to a limited number of foods, namely egg, peanut, cow’s milk, fish and various nuts1.

There is evidence that the prevalence of food allergy has been increasing in recent decades, particularly in westernised countries2.

On which data rely to see that food allergy prevalence has increased?

The best would be to rely on data provided by oral food challenge procedure, but conducting food challenges in large populations induces high costs and includes potential risks.

For example, the food anaphylaxis admission rates per 100,000 population per year rose:

The prevalence of cow’s milk allergy (CMA) in infants varies from 2 to 7.5% depending on the method of diagnosis1.

CMA often begins in the first months of life and generally persists for several months or years, but some of the paediatric patients do not outgrow CMA1. According to a review of the literature2, tolerance is still not achieved after 3 to 4 years in around 20% of cases. According to a study by Saarinen et al. looking after 118 children with CMA, 15% of those with IgE mediated CMA were still allergic after 8.6 years whereas children with non IgE mediated CMA were all tolerant at age 5 3. The natural evolution of CMA varies according to several criteria such as the IgE status, the age at onset 2…

Elimination from diet of cow’s milk proteins, is the only way to manage Cow's Milk Allergy (CMA).

If the baby is breast fed, mothers should be encouraged to continue breast feeding while avoiding all milk products from their diet. To do so, they should get dietary counselling on cow’s milk elimination but also to get appropriate nutritional supplementation (Calcium, Vitamin D)4.

As an alternative, a non-cow’s milk-based formula with rice proteins can also be used. This vegetable option follows the principle of an elimination diet with no animal protein. It is however crucial to use a nutritionally complete formula specially designed for infants, and avoid generic beverages intended for adults.

After 2 to 4 weeks of elimination of the cow’s milk source , should symptoms improve or disappear, breastfeeding or a diet with an adapted formula must be continued on a long term basis. The majority of infants and children with CMA tolerate these formulas5.On the other hand, if symptoms do not improve or disappear, the baby’s diet must be re-evaluated. The second-line treatment is an amino-acid formula.

Regurgitations are frequent in the first year of life. They can be due to an immaturity of the lower esophageal sphincter or can be a symptom of CMA. In case of regurgitations and suspicion of CMA, a thickened CMA formula is an adapted response1 (see the algorithm thereafter, adapted from1). 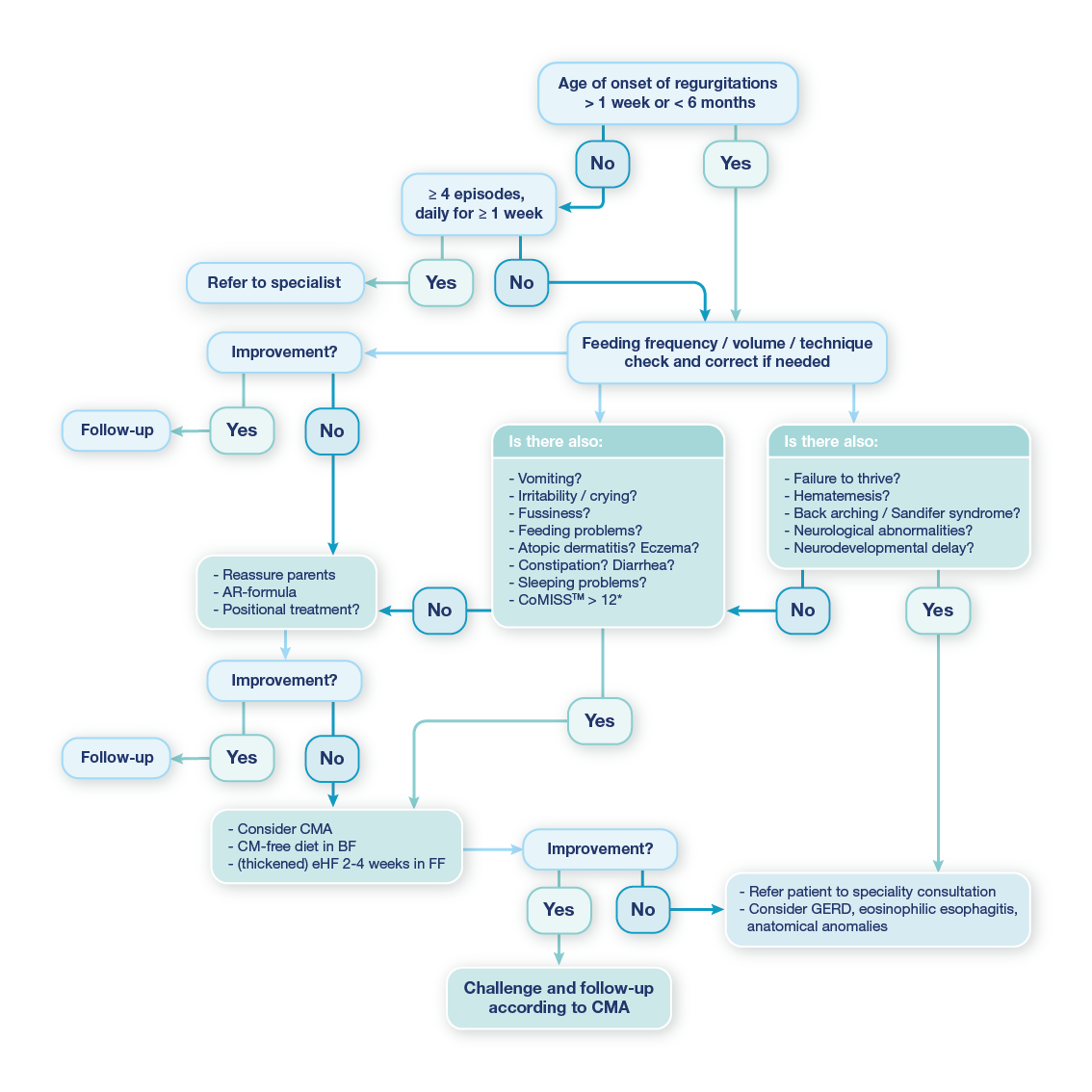 *CoMiSSTM: The Cow's Milk-related Symptom Score is an awareness tool to recognize possible manifestations of CMA2. The cut-off value of ≥12 has been selected as the criterion to pick up infants at risk of CMA2. It is currently under validation3–5. CoMiSSTM is a trademark of Société des Produits Nestlé S.A., Vevey, Switzerland.

It is generally admitted that around 10% of all infants with Cow's Milk Allergy (CMA) could react to extensively hydrolyzed formulas1. For these infants, the solution is a formula containing free amino acids as the only nitrogen source, namely amino-acids based formula (AAF).

AAFs are adapted for the dietary management of severe allergy to cow’s milk and/or intolerance to extensively hydrolyzed formulas. It should be fed only to infants presenting the symptoms for which it is intended.